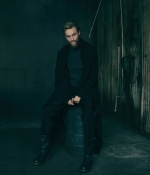 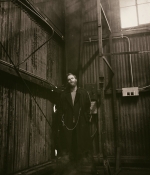 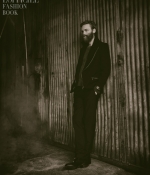 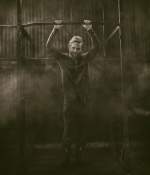 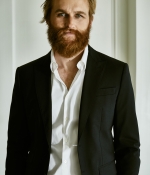 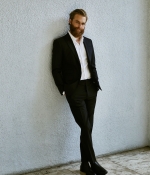 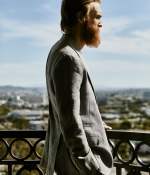 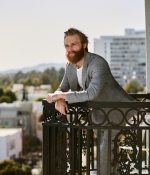 It’s 2004. Wyatt Russell mans the net at a hockey rink—the kind that offers skating lessons and has a sports bar on the second floor—somewhere in British Columbia. Wyatt’s about to get his ass whooped. He’s 17 years old, which means he’ll live another 17 years before he picks up a hunk of a star-spangled shield and call himself Captain America. Here, in Canada? Wyatt’s gunning for the NHL. Big crowds, star goalie. Nothing else. He’s good, too. Best numbers in the Pacific Junior Hockey League. Not today. The puck slips past him. Bad goal. Another one. And another one. Wyatt Russell’s blowing the damn game.

Russell turns to the crowd and throws his hands in the air. In hockey sign language: Look, I’ve done everything I can do. What do you want me to do? Ow! He fakes a leg injury. His knee. Or something. Pulls himself from the game. Team is better for it. Russell’s crew rallies and wins, which makes him think that no one noticed his very bad, no-good game. Sweet. His goalie coach walks up to him after the game, says he wants to meet at the McDonald’s on the corner. 10 minutes later, Wyatt’s at McDonald’s, grease and a screaming McFlurry machine.

“You took yourself out of the game,” the coach says. “If that’s the way you want to live your life? If that’s the person that you want to become—the person who throws your hand up and says, ‘What do you want me to do?’ And you’re not going to push through that moment?

Wyatt starts crying. Wyatt Russell is crying at a McDonald’s. There’s no crying at McDonald’s, unless you’re stuck in the ball pit.

Wyatt never throws his hands in the air again. The coach stays.

“He cut to the core of me. From that moment on, I changed as a person,” Russell says over Zoom this week. “I said to myself, When you come upon hard times and you will—you’re a human being that doesn’t give a fuck what anybody says… You’re doing it for yourself. You’re going to run through that brick wall because that’s what you’re going to do. That was what he taught me through tough love. And that’s become the person that I am today. I think it’s the reason why I’m even able to do this part, to be honest.” [more at source] 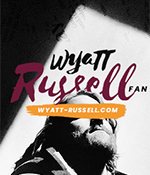 Wyatt Russell was sitting in a tiny donut shop about a mile from the beach, looking slightly wonderstruck at the steady stream of adults buying themselves a treat in the middle of an L.A. summer day. None of the patrons so much as glanced as Russell, who’s hunched over a table near the door in a baseball cap and a gray Sturgill Simpson T-shirt. There was no reason for them to guess that this jovial, pale-bearded dude was the star of a new television show, AMC’s charmingly eccentric dramedy Lodge 49, which premieres August 6. Nor was there a clue that he is the nexus of prime celebrity D.N.A., the child of Goldie Hawn and Kurt Russell.

But then, Wyatt Russell has spent practically his whole life trying not to be recognized—or, at least, not to be recognized in that way. From a young age, he threw himself into hockey, spending after-school hours practicing in working-class Long Beach, where Lodge 49 is set. “I saw a really different type of L.A.,” he said. “A lot of the people who lived there had a trade—carpentry, plumbing, construction.” Although he attended private school by day, hockey allowed him entrée to a wider, “realer” world beyond Hollywood.

His movie-star parents “were both raised lower-middle class/middle class in the 50s and 60s. They didn’t let us forget those values . . . it’s just the way they were,” he said. Hawn and Russell encouraged their son’s interest in hockey. And that, he continued with a goofy little laugh, “made me feel normal. When you are 12, that’s all you want: to be more normal. It’s weird when people are looking at your parents and stuff. These friends didn’t care. They were doing the daily grind and figuring out how to be good people.”

These are exactly the kind of people who populate Lodge 49, a darkly whimsical series about the aptly named Dud (Russell), a down-on-his-luck ex-surfer and pool cleaner who stumbles upon a fraternal lodge brimming with secrets. Its members are ordinary men and women like Ernie (Brent Jennings), a struggling plumbing salesman, and Blaise (David Pasquesi), a pot dealer, who live in Long Beach, where the industry is contracting and working folks are barely getting by. [Source]

Wyatt Russell walks into a room and it’s almost too easy to make assumptions about him. Luckily, he upends nearly all of them.

The star of AMC’s big-swing summer series, Lodge 49, which debuts Aug. 6, towers a few inches above a tall-and-thin six feet, with hair down to his shoulders, a scruffy beard, and a languid surfer beach drawl to complete the stereotype of the SoCal beatnik—which he plays very well, but hardly fills.

No, this is the son of Kurt Russell and Goldie Hawn, and his foray into Hollywood would seem a formality had the 32-year-old actor not spent the majority of his life rejecting the family business in pursuit of a career as a hockey player.

When we meet in Beverly Hills to discuss his new series, which is also his first leading role, the person we encounter is not the strung-out stoner his looks might betray, nor is it the entitled heir to Hollywood royalty you might expect from a person with as much celluloid history in his bloodstream.

Instead, the Wyatt Russell we meet is as wide-eyed and enthusiastic as a breakthrough actor experiencing the spoils of Hollywood for the first time, but with the self-awareness and intelligence of a person who knows how brutal the industry can actually be.

Maybe that’s because, for all the ways he’s seen his mother, father, and half-siblings Kate and Oliver Hudson navigate the business, he’s also churned through perhaps the only industry more ruthless: professional sports. Before he started seriously pursuing a career in acting eight years ago, he had spent over a decade as a promising hockey goalie, until an injury set him on a new path.

It’s perhaps fitting, then, that Russell’s debut as a leading man is in a TV series as unconventional as Lodge 49. As Russell tells it, he wouldn’t have it any other way. [Source]